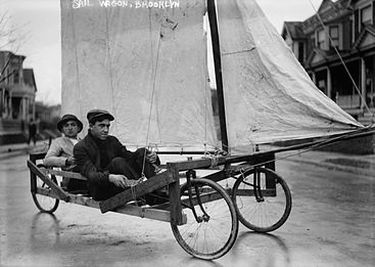 Land yachting, also known as sand yachting or land sailing, is the act of moving across land in a wheeled vehicle powered by wind through the use of a sail. The term comes from analogy with (water) sailing. Historically, land sailing was used as a mode of transportation or recreation. Since the 1950s it has evolved primarily into a racing sport.

The first recorded use of the wind to power a land vehicle can be found on the walls of an Egyptian tomb almost four thousand years old. Since then, all manner of craft have been designed in an attempt to provide a viable means of moving people and goods over land. The invention of the steam engine solved the problem of mass transportation but the potential for harnessing the wind to create sporting and leisure craft continued to be explored. The birth of the modern land yacht is generally thought to have taken place in Belgium around the turn of the 19th century. The Dumont brothers built a series of fast, light weight yachts between 1900 and 1910 and gave birth to sport of land sailing.

The modern land yacht, a three-wheeled polyester/fibreglass and metal cart, often with a wing-mast and relatively rigid (full-batten) sails, has been used since 1960. 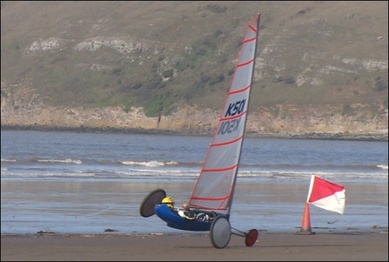 In 1967 a French Foreign Legion officer organized a land yacht race across the Sahara Desert. Teams from 7 countries assembled at Colomb-Béchar in Algeria and using French-designed and built machines for the most part, sailed 1,700 miles (2,700 km) through Algeria, Spanish Morocco and into the capital of Mauritania. Due to the harsh conditions, the idea of racing was abandoned, though at the time three young American boatbuilders, Larry Pardey, Richard Arthur and Warren Zeibarth (Captain, Pardey), were leading the race, with scores double those of any other team. The story made the cover of National Geographic in November 1967. A reinactment of this event took place three years later and was filmed by National Geographic.

Competition is organised around several classes of yacht. All racing yachts are built from lightweight materials with technically advanced sails. They are potentially very fast and are strictly governed by British Landsailing (formerly The British Federation of Sand & Land Yacht Clubs), and still commonly referred to as the Fed. One of the Fed's stated aims is to widen the appeal of the sport. It will provide support to any organisation seeking to promote the sport of landsailing but does expect clubs and affiliated commercial operators to adhere to very strict safety rules. The Fed is supported by the Sports Council.You must have a pilots licence issued by the Federation after a lengthy period of assessment before racing yachts in classes 2, 3, 5 and Standart. With the recent introduction of the mini yacht to national and international events, a pilot's licence is now also required to race this class.